Home/Erotic Laborers, legal, Media, rights/Hawaii HB 1902: Police Can Touch My What?
Previous Next

We are writing to you to let you know of our opposition to HB 1902 because it won’t do what you say it will.  You shouldn’t write any legislation that would allow law enforcement to sexually assault or abuse vulnerable populations in any way and that’s what HB 1902 proposes to do in section 12(5).  In the same section you have pledged to imprison prostitutes and sex trafficking victims and take from them $500-1000 of the money they have earned through prostitution.  It is precisely because of legislation like this that sex trafficking victims and prostitutes don’t have access to equal protection under the law or the due process protections of the justice system in the first place.  Having this poorly crafted legislation conflate both groups together under the guise of providing security and protection is already a failed policy approach.

Here in Alaska, we have spent lots of time educating legislators about disastrous results of this same type of failed policy.  Now Alaska Senator Berta Gardner (  907-465-3873) has updated language in her Alaska Senate Bill 21 to instead incentivize the right behavior both of law enforcement and our community members by altering the prostitution statute so that a person can’t be charged with prostitution as a result of reporting that they were the victim or witness of a serious felony.  http://www.akleg.gov/PDF/29/Bills/SB0021B.PDF

It has a long list of possible legislative avenues for Hawaii to pursue when addressing protection for people in the sex trade. 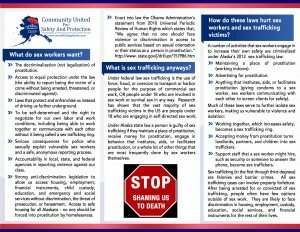