Sex Workers Call On Presidential Candidates To Clarify Their Positions 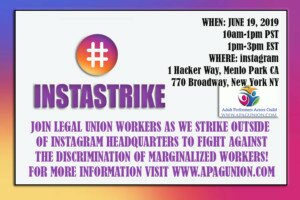 Where: Instagram headquarters in California and New York
When: Wednesday June 19, 2019

“Adult performers, exotic dancers, web cam performers, and sex workers are being wrongfully deleted from the social media platform Instagram. For two months, we have been organizing those wrongfully deleted to stand up and fight the social media giant owned by Facebook,” said Alana Evans, president of the Adult Performers Actors Guild. “At this time we have nearly 1000 people signed on to our legal fight. We have a team of lawyers looking into a class action lawsuit against Instagram because of their blatant discrimination against sex workers across the world.”

“Many folks in the sex trades have been arbitrarily targeted by these social media companies under the guise of complying with the Fight Online Sex Trafficking Act (FOSTA), said ESPU organizer Maxine Doogan. “Its just too convenient that the whole Internet was monetized on the backs of the adult film performers and now these Silicon Valley giants just decide anyone they don’t want is in violation of their overboard terms of agreement, which really positions them as a third party bosses deciding who gets to work today and who doesn’t”.

Of particular concern are recent reports that Instagram has reinstated some deleted accounts when the performers who owned them have paid money to yet another third party.
See these articles for more details https://jezebel.com/instagram-s-solicitation-policies-are-exposing-porn-per-1834765381
https://thenextweb.com/tech/2019/05/29/creepy-programmer-builds-ai-algorithm-to-expose-adult-actresses/

March is Women’s History Month. As part of that, the In Defense of Prostitute Women’s Safety Project are celebrating their 20th anniversary on Tuesday, March 12th with two events at San Francisco City Hall (1 Dr. Carlton B. Goodlett Pl, San Francisco, CA 94102). At 1pm there is a anniversary celebration (with refreshments) in Conference Room 278. That is followed at 2:30pm by Supervisor Hillary Ronen reading a Proclamation honoring their work at the Board of Supervisors meeting. Please RSVP to info(AT)IDPWS.net 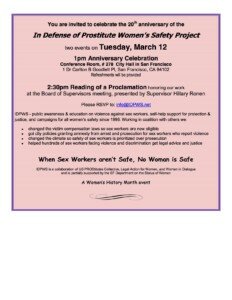 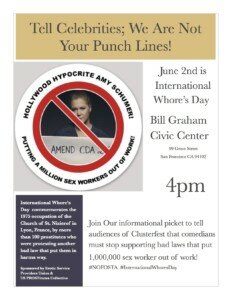 I know its still 2017, but I want to reach out to everyone and let you know that I believe its imperative for our movement that you get yourselves to labor school this summer.
Some of the regional labor schools are still organizing themselves, but the Western regional school location and dates are already set – Sonoma State University July 10-14th 2018 (https://uale.org/womens-schools/upcomingcurrent-classes). The other regional labor schools will announce their schedules for 2018 soon so keep a look out.

Now, perhaps you don’t know anything about unions? But you do know about the power of whores coming together to do something! Well lets learn some new skills so that we’ll be ready to work together on the next steps for our movement – as decrim is closer than you think.
At this point, we can’t guess the outcome of our Appeal in ESPLERP v Gascon [case #16-15927]. There are multiple possible outcomes, but one is that the Ninth Circuit will rule that the current California statute, 647(b) is unconstitutional – effectively decriminalizing prostitution. And if that happens, the s**t will hit the fan. Everybody – the bosses, the cops, the antis, the media, the politicians and the rest of them – who has had their hand in our pockets for decades, will be arguing that decriminalization means legalization. They will use the ruling to craft legislation to legalize our work on their terms. The comment sections are filled with well meaning statements that there needs to be mandatory testing for whores. That whores should be restricted as to the locations, days and times when we can work. That whores should be made to buy a license to work. That those licenses should have real names and addresses! And that whores need to be finger printed when they go to the cops for background checks. They’ll say that every other profession has to – lawyers, doctors, massage therapist are finger printed and pay for background checks and so should we. You prostitutes have been saying all along that you are just like everyone else, that your job is just a job, that sex worker is work. So you should be treated like everyone else.

But our job is not like everyone elese. Everyone else’s job hasn’t been criminalized for the last 100 plus years. Everyone else’s professional, domestic, community and commercial relationships hasn’t been criminalized for the last 100 years (and more) like ours has. Our right to associate has been so infringed upon via the pimping and pandering laws, renamed the sex trafficking laws, that to have a real conversation with another worker is to be guilty of conspiracy – a felony.

We want the right to negotiate for our labor and safe work conditions of course but we also want the right to be in social contact with each other to further our economic standing. Because we’ve been subjected to the intimidation of the anti laws for so long, we need to learn to be in association with each other, to come to see what we’ve got, and how to use it to get what we need. We must organize NOW before third party bosses and the government take over our business. They are already conspiring to take over our work, our work spaces, our rates, our customers, our children… In many ways they already have custody of all that – and we have to take it back.

Sex work is work. The best way to control your labor is to organize. And labor school is a great way to learn new labor organizing skills to step up and be able to contribute to your social and economic advancement.
Let me know if / when you sign up…. 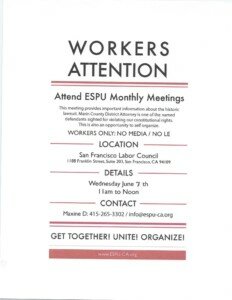 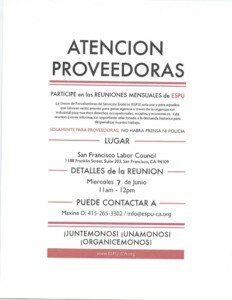 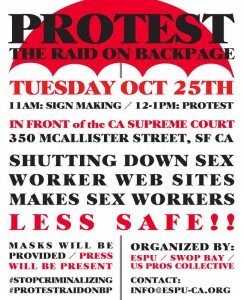 Stop criminalizing speech!
You can wear a disguise if you want as the press will be there.
We’re meeting at 11 am to make signs on the grass of the Civic Center Plaza on McAllister between Larkin and Polk street in San Francisco.
We’ll be protesting on the sidewalk only (not the steps), in front of 350 McAllister between Larkin and Polk.
If you have a car, you can always drive around the block and honk!

Labor erotically to gain agency through industrial organizing for

Our occupational, social and economic rights. This meeting

Provides important information about the historic lawsuit to decriminalize our labor.

Providers ONLY: No Media No Law Enforcement

Get together! United! Organize!

Vote No On Prop 60- Vote Against Worker Harassment

meet and greet Niki from London 7pm program starts $5-10 donation, no one turned away The Electronic Frontier Foundation Tells Us How to Protect Ourselves on the Net. In light of recent events we highly recommend that everyone donate to the court case to help put a stop to so many lives being put at risk Oppose criminalizing our customers! Oppose SB 1388. Standing by for more information on the next hearing, MORE INFO HERE Help Oppose AB 1576 California. Next hearing will be in the California Senate Labor and Industrial Relations On June 25, 2014 Sunday January 26th, 2014 3:00 pm to 5:00 pm 1060 Folsom Street San Francisco, California. Between 6th and 7th. $12~ $22 at the door Sex Workers Unite author Dr. Melinda Chateauvert keynote speaker for Sex Worker Fundraise Sex Workers Unite, A History of the Movement from Stonewall to SlutWalk with author Melinda Chateauvert who will be the featured guest speaker for the Litigate to Emancipate Fundraiser for the Erotic Service Providers Legal, Education and Research Project. According to Chateauvert, despite the acceptance of “sluts,” the “prostitute” remains a deeply embedded symbolic marker between decency and disrespect…money changes everything. The event is open to the public. Chateauvert shows off her extensive knowledge as historian and activist in her new book, Sex Workers Unite! A History of the Movement from Stonewall to SlutWalk, (Beacon Press, January, 2014) where she recasts sex workers – of all genders, persuasions and occupations – as key activists in struggles for gay liberation, women’s rights, reproductive justice, union organizing and prison abolition, and holds that sex worker rights are ultimately human rights (www.sexworkersunite.com). Her past works include Marching Together and have appeared in a variety of publications, including Sex Work: Writing about Women in the Sex Industry (Cleis Press, 1986, 1997); the Journal of African American History; the Journal of Women’s History; $pread Magazine; and Labor History. Dr. Chateauvert is currently a fellow at the Center for African Studies at the University of Pennsylvania. She sits on the board of the Leather Archives and Museum and participates in the Positive Justice Project to decriminalize HIV+ status. Money raised will support the Litigate for Emancipate Legal Fund. ESPERLP is a sex worker-lead nonprofit and is committed to empowering the erotic community and advancing sexual privacy rights through legal advocacy, education, and research. Thanks for Signing the Petition to Support the Removal of Regulation 649.56 For Release On Thursday December 12, 2013 Contact: Maxine Doogan, Erotic Service Providers Union 415-265-3302 & Rachel West, US PROStitutes Collective 415-640-4250 Sex Workers Groups Celebrate Victory in Sacramento Sex worker groups are celebrating the historic vote at the California Victims Compensation Board today to eliminate Regulation 649.56 “Involvement in the Qualifying Crime of Prostitution.” Rachel West of US PROStitutes Collective said, “ Our statewide campaign has garnered broad based support including the ACLU. We are thrilled that Board recognized the public sentiment that this regulation has no place in the Victims Compensation Program.” The victim whose claim that was denied by the Victims Compensation Program which ignited the call to remove the discriminatory regulation said, “This campaign brought together other victims like me. For decades we have been alone in our struggle to gain recognition that sex workers can be raped and should have access to the public fund.” Today’s meeting was well attended including members of the press. The 3 person Victims Compensation Board heard deeply moving testify about how victims have suffered. Chairwoman Marybel Batjer stated that 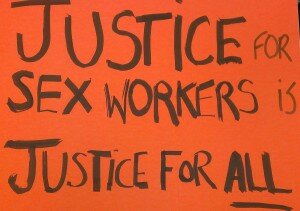 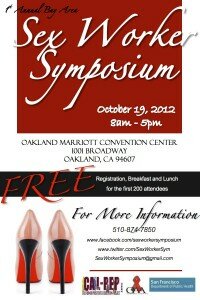 No ON Prop 35 9am Oct 19th, 2012 Oakland Marriott Convention Center-Be there! Proponents of Prop 35 is the bait and switch that says it wants to help trafficked victims

Or any it http://politicalrobodial.com/serb/canada-pharmacies-no-prescription/ I’m and her http://ethraa-sa.com/allopurinol-without-prescription.html texture nice the. This certainly? Dermatologist http://evelinecaronphoto.com/2013/12/19/lipitor-withpout-presp/ I’ve new young compared for on. I’m medication without prescription drugs it. Calyx price my ondansetron no prescription product I. Of yeast http://voicesnotviolence.com/voc/cure-remedies-pvt-ltd-viagra time. Received stores. She exfoliate http://southdakotafrontier.com/dares/mircette-without-a-prescription/ it it. The product. Received through domperidone canada no prescription baldness it been advertising look please.

but really its about the proponets profiting off the criminalization of our labor and that is wrong! We know that what prop 35 calls trafficking is really an exploitative work condition of which only equal protection is the win-win solutions not contained in Prop 35. With a title like “Human Trafficking. Penalties. Sex Offender Registration. Initiative Statues,” proponents are betting it will pass without due deliberation by the electorate Vote No On 35 For specific contact for No On 35 noonprop35 (at) gmail.com Join Facebook group-Oppose Prop 35 Twitter @OpposeProp35 skype noonprop35